Design: A pine tree with the words "AN APPEAL TO HEAVEN" written in all capital letters above the tree, and a white field behind it.

The Pine Tree Flag or the "An Appeal to Heaven Flag" also known as Washington's Cruisers Flag and An Appeal to God Flag was one of the first flags which were used in 1775 during the American Revolution.

The Pine Tree Flag, which featured a pine tree placed in the center of the flag with the motto "An Appeal to Heaven," written in all capital letters above the tree, or less frequently "An Appeal to God", was originally used by a squadron of six cruisers which were commissioned under George Washington's authority as commander in chief of the Continental Army in October 1775. It was also used by Massachusetts state navy vessels in addition to privateers sailing from Massachusetts.

None of the men who have been raised by this and several other colonies are in future to be distinguished as the troops of any particular colony, but as the forces of "The United Colonies of North America," into whose joint service they have been taken by the Continental Congress, and are to be paid and supported accordingly."

On the 18th of July, a month after the battle of Bunker's Hill, Major-General Putnam assembled his division on the height of Prospect Hill, to have read to it the manifesto of Congress, signed by John Hancock, its president, and countersigned by Charles Thomson, secretary. The reading was followed by a prayer suited to the occasion, and at the close of the prayer, at a signal from the general, the troops cried 'Amen' and at the same instant the artillery of the fort thundered a general salute, and the scarlet standard of the Third Connecticut Regiment recently sent to General Putnam, bearing on the one side the Connecticut motto, "Qui transtulit sustained," and on the other, the recognized motto of Massachusetts, "An Appeal to Heaven," were unfurled. The same ceremony was observed in the other divisions.

Lieutenant Paul Lunt, in his Diary, which has been printed, says:

May 10, 1775, marched from Newburyport with sixty men, Captain Ezra Lunt, commander, and May 12, at 11 o'clock, arrived at Cambridge.... June 16, our men went to Charlestown and entrenched on a hill beyond Bunker's Hill.... June 17, the regulars landed a number of troops, and we engaged them. They drove us off the hill and burned Charlestown. July 2, General Washington came into the camp.... July 18th. This morning a manifesto from the grand Continental Congress was read by the Rev. Mr. Leonard, chaplain of the Connecticut forces upon Prospect Hill in Charlestown. Our standard was presented in the midst of the regiments, with this inscription upon it, "Appeal to Heaven," after which Mr. Leonard made a short prayer, and then we were dismissed, by the discharge of a cannon, three cheers, and a war-whoop by the Indians."

Cambridge, July 21. On Tuesday morning the standard lately sent to General Putnam was exhibited flourishing in the air, bearing on one side this motto, 'An appeal to Heaven,' and on the other, 'QUI TRANSTULIT SUSTINET.' The whole was conducted with the utmost decency, good order, and regularity, and to the universal acceptance of all present. And the Philistines on Bunker's Hill heard the shout of the Israelites, and, being very fearful, paraded themselves in battle array."

On June 19, 1775, two days after the battle of Bunker Hill, and before the news had reached Georgia, there was a meeting of a committee of the leading men of Savannah to enforce the requirements of the American Association. After the meeting, a dinner was had at Tondee's tavern, where a 'union flag' was hoisted upon a liberty pole, and two pieces of artillery were placed under it.

Aug. 1, 1775, there was raised at Prospect Hill, Charlestown, for a flag-staff, a mast seventy-six feet high, which came out of a schooner that was burnt at Chelsea.

In September 1775, Arnold made his famous expedition through Maine to Canada, and, when drifting down the gentle current of the Dead River, came suddenly in sight of a lofty mountain covered with snow, at the foot of which he encamped three days, raising the Continental flag over his tent. What its color was, or the devices upon it, we have no means of ascertaining. The mountain is now known as 'Mount Bigelow,'-tradition asserting that Major Bigelow, of Arnold's little army, ascended to its summit, hoping to see the spires of Quebec.

In September 1775, two strong floating batteries were, launched on the Charles River, and opened fire, in October, on Boston, which caused great alarm and damaged several houses. They appear to have been scows made of strong planks, pierced near the water line for oars, and along the sides higher up for light, and musketry. Their ensign was a pine tree flag. The six schooners first commissioned by the United Colonies sailed under the pine tree flag.

Colonel Reed, in a letter from Cambridge to Colonels Glover and Moylan, under date Oct. 30, 1775, says:

Please fix upon some particular color for a flag, and a signal by which our vessels may know one another. What do you think of a flag with a white ground and a tree in the middle, the motto, 'An APPEAL TO Heaven,'-this is the flag of our floating batteries."

Colonels Moylan and Glover replied the next day, that, as Broughton and Selman, who had sailed that morning, had none but their old colors (probably the old English union ensign), they had appointed as the signal by which they could be known to their friends the ensign at the main topping lift. In January, Franklin was wearing the pine tree flag.

The suggestion of Colonel Reed seems to have been soon adopted. The 'London Chronicle,' for January 1776, describing the flag of a captured cruiser, says:

There is in the admiralty office the flag of a provincial privateer. The field is white bunting. On the middle is a green pine tree, and upon the opposite side is the motto, 'An Appeal to Heaven.'"

April 1776, the Massachusetts council passed a series of resolutions for the regulation of the sea service, among which was the following:

Resolved, That the uniform of the officers be green and white, and that they furnish themselves accordingly; and that the colors be a white flag, with a green pine tree, and the inscription, 'An appeal to Heaven.'"

NOT ALL PINE TREE FLAGS ARE THE SAME!
HERE'S WHY...

Our most popular and versatile outdoor Pine Tree flag, USA Flag Co. flags offer the optimum combination of elegance and durability for every purpose. The 100% nylon material provides a rich, lustrous appearance. Our flags have superb wearing strength due to the material’s superior strength-to-weight ratio and will fly in the slightest breeze. Our historic flags are finished with strong, polyester canvas headings and spurred brass grommets, and four needle fly hem. The result is a flag that will be flown with pride year after year.

Add this Pine Tree Flag aka An Appeal To Heaven Flag to your cart for Immediate Delivery Now. 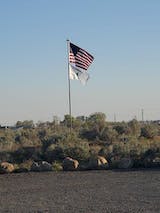 D
Debbie (Seattle, US)
Important flag for our times

Can't wait for the receiver of this flag to open it!

I am very happy with my purchases. I will buy here again when I need to replace my flags. Thank you USA Flag Co.!

really love the history of George Washingtons life. "Americas God and Country"
by William Federers book an amazing compellation of Quotes Encyclopedia style of the countrys patriots and heros! highly recommend this.
Do you have a flag pole set up for it?

Beautiful reminder of our heritage flying from my front porch!

So good to be able to buy from my own countrymen.

exactly what I wanted - thanks

Wonderful high-quality flag with a message for today.

It was hard to find this flag, thank you!