Outdoor Christian flags by USA Flag Co. are available in your choice of durable nylon or polyester and manufactured using a fully Sewn Design. All USA Flag Co. flags are finished with polyester heading and brass grommets.

Some of the ways of idealizing the kingdom of God may be suggested by analogy from the development of patriotism, and loyalty to one’s country.

Use the flag as the symbol of all that our country signifies. The flag is displayed, treated with dignity, and saluted because it represents our ideal country. It engenders loyalty when its meaning is understood and respected. For idealizing the Kingdom, there can be no better method than the use of a symbol, and we have no hesitancy in recommending the Christian flag. There have been a number of attempts to secure the general adoption of a symbol of the Kingdom. The church flag, the chaplain’s pennant (for use onboard government vessels during religious services), the Conquest flag, and the Christian flag have been used.

The Christian flag originated on September 26, 1897, at a "Rally Day" in the Sunday school at Brighton Chapel, Coney Island. A speaker had been engaged but failed to reach the meeting on time. Always ready to meet emergencies, Mr. Charles C. Overton, who then had charge of that school, undertook to give an extemporaneous talk. Not having prepared anything special, he took for his text the American flag which chanced to be draped over one corner of the pulpit. While he was speaking, inspiration seemed to come to him.

Why, thought he, should we not have a flag for our Sunday schools and churches? Before he sat down he had outlined to the audience a plan for such a Christian flag which should not be restricted by any geographical boundaries but would remind all men of their allegiance to God just as their national flag reminds them of their neighbors. Drawing upon his imagination he pictured a flag, the field of which would be white, the color for purity, innocence, and peace. White is recognized as the flag of truce on every battlefield, and as soon as a flag of this color is seen the cannon’s roar is silenced. In the corner of his white flag, Mr. Overton proposed deep blue, the color of the unclouded sky, the symbol of faith, trust, and sincerity, and on this a red cross, the recognized emblem of sacrifice, Christianity’s central doctrine, and life.

Such a firm hold did his own suggestion take that Mr. Overton immediately had a flag made corresponding with the one he had described, and on the following Sunday, this was draped over the other corner of the pulpit, alongside the American flag. This first Christian flag was made by Mr. Annin, a well-known flag manufacturer of New York, who has done much to aid Mr. Overton in securing the wide adoption of the flag for the purpose for which it was conceived.

Its use increased by leaps and bounds. It is found in nearly every city and village in the United State and has spread across the seas until it has encircled the world. The Christian flag is not patented and is free from commercialism. Anyone may manufacture it, and it may be used on all proper occasions.

Christian flags may be displayed at conventions, conferences, church demonstrations, and parades, and the American flag may be used for general decorative purposes. For boys’ and girls’ societies and clubs and for the church school, especially on program occasions, the two flags may be presented and saluted.

For the American flag most boys and girls know the following salute:

"I pledge allegiance to my flag and to the country for which it stands, one nation indivisible, with liberty and justice for all.” - (1917 Version)

For the Christian flag, the following salute is appropriate:

"I pledge allegiance to my flag and to the Saviour for whose kingdom it stands, one brotherhood, uniting all mankind in service and love."

Dr. Hough was asked to prepare such a pledge, and while the meeting was still in session wrote the salute as it is printed above. This pledge was used for the first time by the author on Christmas Eve, 1908, in the Third Methodist Episcopal Church, Long Island City, New York, of which Mr. Hough was the pastor. Patriotic loyalty and self-sacrifice are common topics. The Christian flag bears no symbol of warfare or conquest. It is equally significant to all nations. It stands for no creed nor denomination, but for Christianity. It is a banner of the Prince of Peace, and the Christian patriot who salutes it pledges allegiance to the kingdom of God.

NOT ALL CHRISTIAN FLAGS ARE THE SAME!

Our most popular and versatile outdoor Christian flag, USA Flag Co. flags offers the optimum combination of elegance and durability for every purpose. The 100% nylon material provides a rich, lustrous appearance. Our flags have superb wearing strength due to the material’s superior strength-to-weight ratio and will fly in the slightest breeze. Christian flags are finished with strong, polyester canvas headings and spurred brass grommets, and four needle fly hem. The result is a flag that will be flown with pride year after year.

Add this Christian Flag to your cart for Immediate Delivery Now.

I love sharing my faith with the world. I just wish the material was a bit more rugged to stand up against the wind. I had to repair the flag a few times with my sewing machine along the borders but the main part of the flag is starting to fray through to holes forming. 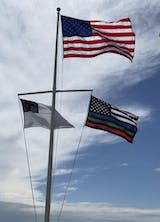 Outstanding Flag , beautiful color and appears to be well built . Tremendous service , they responded to my concerns in a timely and professional manner !

Just put up yesterday. Will be up 24 hrs/day until after Christmas. We’ll see how it stands up to SOCAL weather.

A
Ann C. (Concord, US)
American made