California Flag Design: Based on a flag flown during the Bear Flag Revolt. Contains a single red star, a red stripe along the bottom, and a California grizzly bear.

On June 14, 1846, a small band of settlers marched on the Mexican garrison at Sonoma and took the commandant, Mariano Vallejo, prisoner, They issued a proclamation that declared California to be a Republic independent of Mexico. This uprising became known as the Bear Flag Revolt after the hastily designed flag depicting a grizzly bear and a five-pointed star over a red bar and the words "California Republic." The grizzly bear was a symbol of great strength while the lone star made reference to the lone Star of Texas. The flag only flew until July 9, 1846, when it was learned that Mexico and the United States were already at war. Soon after, the Bear Flag was replaced with the American flag. It was adopted as the State Flag by the State Legislature in 1911.

"420. The Bear Flag is the State Flag of California. As viewed with the hoist end of the flag to the left of the observer there appears in the upper left-hand corner of a white field a five-pointed red star with one point vertically upward and in the middle of the white field a brown grizzly bear walking toward the left with all four paws on the green grass-plot, with head and eye turned slightly toward the observer, a red stripe forms the length of the flag at the bottom and between the grass plot and red stripe appear the words the CALIFORNIA REPUBLIC.

The hoist of flag width is two-thirds of the fly or flag length; the red stripe width is one-sixth of the hoist width. The state official flag hoist widths shall be two, three, four, five, six, and eight feet. The diameter of an imaginary circle passing through the points of a star is one-tenth of the fly length; the distance of the star center from the hoist end is one-sixth of the fly length and the distance from the star center to the top of the flag is four-fifths of the star-enter distance from the hoist end. The length of the bear diagonally from the nose tip to the rear right-hand paw is two-thirds of the hoist width; the height of the bear from shoulder tip vertically to a line touching the bottoms of the front paws is one-half the length of the bear, the location of the bear in the white field is such that the center of the eye is midway between the top and bottom of the white field and the midpoint of the bear’s length is midway between the fly ends. The grass plot in length is eleven-twelfths of the hoist width of the plot between the rear of the left front paw and the front of the right rear paw is one-tenth of the grass plot length. The height of the condensed Gothic letters as shown on the representation is one-half of the fly length with the beginning and ending letters of the words equidistant from the fly ends.

Colors. The following color references are those of the Textile Color Card Association of the United States, Incorporated, New York; the colors on the flag are to be substantially the same as these color references; White-of the white field and the bear’s eye and on the bear’s claws is White cable number 70001. Red-of the red stripe, the star, and the bear’s tongue is Old Glory, cable number 70180. Green-of the grass plot is Irish Green, cable number 70168. Brown–of
the bear is Maple Sugar, cable number 70129. Dark Brown–of the bear outline, paws, shading, fur undulations, iris of the eye, the 12 grass tufts in the grass-plot, and the setters is Seal, cable number 70108. The General design and details of the Bear Flag shall correspond substantially with the following representations. This shall be the official State Flag of all state, county, city, and town agencies. The flags now issued or in use shall continue in service until a replacement is required. (Amended by State 1953, Chapter 1140.)"

NOT ALL CALIFORNIA STATE FLAGS ARE THE SAME!

Our most popular and versatile outdoor California flag, USA Flag Co. flags offer the optimum combination of elegance and durability for every purpose. The 100% nylon material provides a rich, lustrous appearance. Our flags have superb wearing strength due to the material’s superior strength-to-weight ratio and will fly in the slightest breeze. State flags are finished with strong, polyester canvas headings and spurred brass grommets, and four needle fly hem. The result is a flag that will be flown with pride year after year.

Add this California Flag to your cart for Immediate Delivery Now.

Love that it is made in USA. Most likely I will be back in the future. 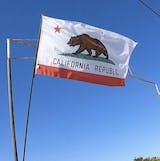 Quality American made flag. I paid for it, I received it, I’m flying it, I’m happy with it. Enough said.