Designed by: Colonel William Moultrie - in 1775

The Fort Moultrie Flag, also known as the Crescent Flag or Liberty Flag, was a key flag flown in the American Revolutionary War.

The Fort Moultrie Flag was designed, by the commission, in 1775 by Colonel William Moultrie, to prepare for war with Great Britain.

It was flown by his troops in the successful defense of Sullivan's Island against the British fleet in June 1776.

A Brief History of the Fort Moultrie Flag aka Crescent Flag

The Crescent Flag used in the heroic defense of Fort Sullivan (now Fort Moultrie, on Sullivan's Island, in Charleston Harbor) against the British in June 1776, by Colonel William Moultrie, was the first American flag used in the South in the Revolution. It consisted of a dark blue field with a white crescent in the upper right-hand (dexter) corner.

Colonel, afterward General Moultrie, states in his Memoirs that "as there was no national flag at the time, I was desired by the Council of Safety (on September 13, 1775, on taking possession of Fort Johnson, on James Island, in the harbor) to have one made; upon which, as the State troops were clothed in blue and the fort was garrisoned by the men of the first and second regiments who wore a silver crescent on the front of their caps, I had a large blue flag made with a crescent in the dexter corner to be uniform with the troops. This was the first American flag displayed in the South."

It was this flag that the gallant Sergeant William Jasper, of South Carolina, in the attack on Fort Sullivan, the following summer, fastened upon a sponge staff and replaced upon the bastion in the midst of the furious fire, after it had been shot away by the enemy's fleet and had fallen outside the parapet upon the beach. For his heroic act Governor Rutledge, the following day, presented him with his own sword, and thanking him in the name of his country, tendered him an officer's commission which Jasper modestly declined.

Iconic to the state as a symbol of freedom and the Revolution, eventually this was used as the foundation for the state's own flag. The fort was renamed Fort Moultrie, and the flag is sometimes referred to as the Fort Moultrie Flag. It is occasionally rendered with the word LIBERTY separately in white, along the lower center of the flag.

In addition to being the basis for the South Carolina State Flag, it is the official flag of Moultrie County, Illinois.

Click here for the History of the Moultrie Flag

NOT ALL FORT MOULTRIE FLAGS ARE THE SAME!

Our most popular and versatile outdoor Fort Moultrie Flag by USA Flag Co. flags offers the optimum combination of elegance and durability for every purpose. The 100% nylon material provides a rich, lustrous appearance. Our flags have superb wearing strength due to the material’s superior strength-to-weight ratio and will fly in the slightest breeze. Our historic flags are finished with strong, polyester canvas headings and spurred brass grommets, and four needle fly hem. The result is a flag that will be flown with pride year after year.

Add this Fort Moultrie Flag to your cart for Immediate Delivery Now.

Very pleased with the quality of this flag; the Moultrie flag is very special to us in the state of South Carolina. Proud to fly it! 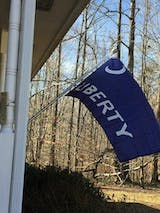 Great flag! This is my 4th or 5th flag from this company and I have loved the quality and colors on each of them. This one I got for MLK Day and took it on a run. It held up well and the colors are vibrant, making the LIBERTY easily readable. Worth every penny! 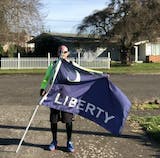