Texas Flag Design: 1/3 of the hoist is blue containing a single centered white star. The remaining field is divided horizontally into a white and red bar.

Design of the Lone Star Flag

The Consultation, meeting in November 1835, avoided an outright declaration of independence for Texas, choosing instead to support the Mexican Constitution of 1824 and demanding separate statehood for Texas within the Mexican Confederation. The delegates approved an interim "Organic Law" setting up a provisional government and chose three commissioners to go to the United States to plead their cause, gain financial support, prepare military units, fit out ships, and generally solicit the U.S. government's recognition for the proposed Texian government.

The commissioners, Stephen F. Austin, William H. Wharton, and Branch T. Archer, soon realized that their cause would be considerably strengthened by an outright declaration of independence from Mexico. Their flag designs submitted to the revolutionary government reflect a strong commitment to a country tied to Anglo-American tradition, with a nod to Mexican ties in the red, white, and green colors of the second design. The idea for an independent flag - The shape of the English Jack in the corner indicates the origin of the North American people. The stripes indicate the immediate descent of most Texians. H[torn] Texas-the tricolor is Mexican. Mottos in the center:

"Where Liberty dwells there is my country."
"WASHINGTON-In his example there is safety"

In place of the star, but the sun with the head of Washington in the center, and rays, representing the light of liberty, radiating all round-outside of this and above, but the motto "Where Liberty dwells there is my country"---change the stripes from green to blue & have exactly thirteen of them [text scribbled over]-the stripes will then be blue and white-change the ground of the Jack in the corner from white to yellow, or leave it white. Either will do, either will make a handsome Texas Jack, which old grand Father John Bull need not be ashamed, or unwilling to acknowledge.

This flag is approved by is and we recommend its adoption

I object much to the hackneyed quotation "Where liberty dwells there is my country. Its frequent use by schoolboys as a motto & by Volunteer companies in their banners have rendered it stale & fulsome. Virgil from whom it is taken expresses the sentiment antithetically. In the Latin language, it has many points & beauty. Ubi Libertas-Ibi Patria. If we are to have it all let us have it expressed in this way. But I should much prefer that the expression motto be discarded & that the words The light of liberty or the words Lux Libertatis if they are preferred to be substituted. The light of Liberty applies to the sun. Underneath Washington, I would have the words "In his example there is safety" With this alteration
I am much pleased with the banner (A)  one blue vertical stripe that has a width equal to one-third the length of the flag;

(B)  two equal horizontal stripes, the upper stripe white, the lower stripe red, each having a length equal to two-thirds the length of the flag;  and

(i)  located in the center of the blue stripe;

(ii)  oriented so that one point faces upward;  and

(iii)  sized so that the diameter of a circle passing through the five points of the star is equal to three-fourths the width of the blue stripe.

(b)  The red and blue of the state flag are:

(1)  the same colors used in the United States flag;  and

(c)  The red, white, and blue of the state flag represent, respectively, bravery, purity, and loyalty.

The pledge of allegiance to the state flag is as follows:

"Honor the Texas flag; I pledge allegiance to thee, Texas, one state under God, one and indivisible."

The pledge was instituted by the Texas Legislature in 1933, and originally referred to as the "Texas flag of 1836" (which was the Burnet Flag, and not the Lone Star Flag then in use). In 1965, the error was corrected by deleting the words "of 1836." In 2007, the phrase "one state under God" was added. The addition of "under God" has been challenged in court, though an injunction was denied.

According to The Handbook of Texas Online, "In 1933 the legislature passed a law establishing rules for the proper display of the flag and providing for a pledge to the flag: "Honor the Texas Flag of 1836; I pledge allegiance to thee, Texas, one and indivisible." The pledge erroneously referred to the 1836 national flag, known as David G. Burnet's flag, instead of the Lone Star Flag. Senator Searcy Bracewell introduced a bill to correct this error in 1951, but the legislature did not delete the words "of 1836" until 1965."

The pledge was again amended by House Bill 1034 during the 80th Legislature with the addition of "one state under God." The revised wording became effective on June 15, 2007.

NOT ALL TEXAS STATE FLAGS ARE THE SAME!

Our most popular and versatile outdoor Texas flag, USA Flag Co. flags offer the optimum combination of elegance and durability for every purpose. The 100% nylon material provides a rich, lustrous appearance. Our flags have superb wearing strength due to the material’s superior strength-to-weight ratio and will fly in the slightest breeze. State flags are finished with strong, polyester canvas headings and spurred brass grommets, and four needle fly hem. The result is a flag that will be flown with pride year after year.

Add this Texas Flag to your cart for Immediate Delivery Now.

We couldn't get "your" Texas Flag last time we needed it...so we ordered from "W" and put it up! It did not last! Will never order again from any other supplier!

We ordered a 4'X6' US Flag and Texas Flag. I am very happy to find such high quality flags for our home. These flags have strong deep blue and vibrant red and are truly something we can be proud of displaying. The ordering process was very straightforward with timely delivery. 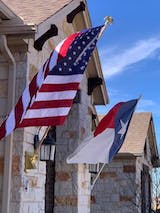 Well made, and colors are correct. I’d buy again. 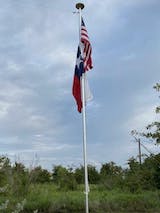